This article first appeared on Golfshake.com in Sep 2015.

Usually in golf, the toughest par 3s are the ones that play the longest. Most amateur golfers prefer to hit a short iron into a green rather than a long iron or even a wood. However, just because a par 3 is short it does not mean it is not memorable or challenging.

The 12th at Augutsa National has just missed out at 155 yards but take a look at who made the cut in our ten best par 3’s under 150 yards in the world. 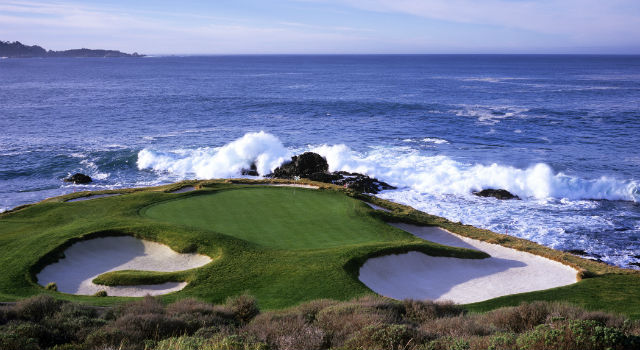 The 7th hole at Pebble Beach is the shortest par-3 in major history. The hole only plays at 106 yards but can strike terror into the eyes of any golfer taking it on. The hole plays downhill but depending on which way the wind is howling from it can be anything from a sand wedge to a well struck 3 iron.

The 7th hole is probably one of the most photographed holes in all of golf and rightly so. Set on a jagged cliff looking over the Pacific Ocean, this hole will set you in a trance as you take in one of the most picturesque views in golf.

The most famous island green in all of golf has brought many memorable moments to our television screens. The beautifully designed Pete Dye hole measures at just 127 yards making it amazing how so many balls make their way into the water hazard.

Steve Lowery was involved in a bizarre incident when he hit the green in the 1998 Players Championship but had his ball stolen by a seagull that then dropped it in the water. Just a year later Fred Couples saw his first attempt end up in the water but then holed out from the drop zone for a par. And who can forget Tiger Woods holing out from one end of the green to the other? Due to the commentary that shot has been modestly declared “better than most.”

The ‘postage stamp’ at Royal Troon

The aptly named “postage stamp” par-3 at Royal Troon is the shortest in Open Championship history. Although just 123 yards off the Championship tees the 8th hole is one of the toughest on the course.

The green is long and narrow and set against a sand dune. The tee is elevated and the shot is played over a gully with deep, vertically faced bunkers surrounding the green. It is a great achievement if you manage to get up and down from any of these bunkers. There is no easy way to play this hole.

Lemuria Golf Club may not be well known but this golf course in the popular Constance Resort in the Seychelles has one of the most impressive short par 3’s in the world.

The 5th hole measures at a mere 133 yards and may seem like a “breather” on the scorecard. However, there is little room for error on this deceptive hole. A large expanse of water surrounds the front of this green with a lone bunker protecting the front left approach.

This testing hole may be picturesque but don’t let it deter your concentration from the demanding shot ahead.

Merion Golf Club has been the host of US Open Championships and has seen the likes of Justin Rose, Lee Trevino and Ben Hogan pick up major victories on this outstanding course.

One of the holes that stands out is the short 13th hole. All of the par 3’s at Merion are over 200 yards apart from the 13th, which is just 115 yards long. A large bunker obscures the view of the green and the green is the smallest on the course with many contours. This is what makes it just as challenging as the long par 3’s.

The 14th hole at Doonbeg Golf Club, Ireland, is one of the most spectacular par 3’s in Ireland, if not the world. Doonbeg is a course with many memorable holes but this one is the standout signature hole.

Despite only being 111 yards, hitting the green is easier said than done. The major drop offs around the green into long rough do anything but instill you with confidence. The Atlantic Ocean stretches out beyond the green, which is both stunning and daunting at the same time. Depending on the wind, you can hit anything from a knock down sand wedge to a 3 iron.

The 13th hole at The Links at Spanish Bay is the final parkland hole on the course. The hourglass shaped green is a struggle to hit despite being just 126 yards long.

The ravine that runs through out the course wreaks havoc for any golfer that leaves their tee shot short. The two bunkers either side of the green also leave a tough up and down if found. The center of the green is your main aim stood on the tee.

The third hole plays at just 100 yards from an elevated tee box. The green however, is tucked away by boulders and you play over a ravine. Any tee shot that misses the green is as good as dead. The hole is often described as “the most photographed hole west of the Mississippi.”

The 17th hole at Los Angeles Country Club is named “Little 17” and as you stand on the tee you will understand just why. Much to the delight of the members, this hole was brought back to life after the 2010 restoration as an alternative hole.

The hole is just 110 yards long and you play to what the members call a “one-of-a-kind perched green pad.” The green itself does not even exceed 2,000 square feet making it one of the smallest greens in America. Any tee shot that misses the green will fall away into the long rough or bunkers.

The Caledonia Course at Caledonia Golf and Fish Club has been voted one of America’s best modern courses by Golfweek and with holes like the 9th, it is no surprise why.

The hole is just 118 yards off the back tees but a large expanse of sand surrounds the front of the green with two more bunkers in play behind the green. The hour glass shape green makes it a tough one to hit, similar to the 15th at Augusta.

Surrounded by beautiful woodland, this hole is truly memorable.