This article first appeared on Golfshake.com in Jun 2016.

With the huge advancements in the technology that goes into golf equipment, it is no wonder that many golf courses around the world are trying to lengthen their courses in order to maintain their original challenge. You will have noticed when watching the professionals on television that most of their courses measure over 7,000 yards yet they still make it look effortless, but where are the longest golf courses in the world?

First of all, these courses are included because of their yardage from the back tees, not overall walking distance. That’s a silly point I hear you say? Well not really, there is one course in Australia called The Nullarbor Links and its concept is quite unique. The par-72 golf course spans 1,365 kilometres with one hole in each participating town or roadhouse along the Eyre Highway. One tee is in fact a staggering 200km from previous green. That is all for another day, so here are the ten longest golf courses in the world. 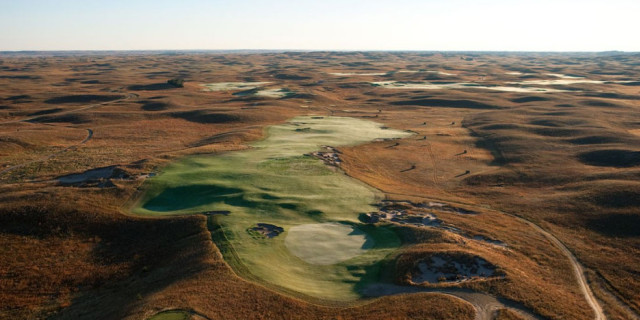 This 8,058 yards course in Nebraska is marked by dramatic elevation changes and endless views of the Sandhills in all directions. The course that was designed by Tom Lehman and Chris Brands is set on a rolling landscape of prairies grasses, undulating fairways and elevated tees.

The course is designed in a links style, which means not only will golfers have to hit the ball a long way, but they must also control their ball flight and direction. To add, there are two other courses you can play at The Prairie Club – the Pines Course and the 10-hole, par 3 Horse Course – as well as the chance to take advantage of some of The Prairie Club’s stay and play packages. 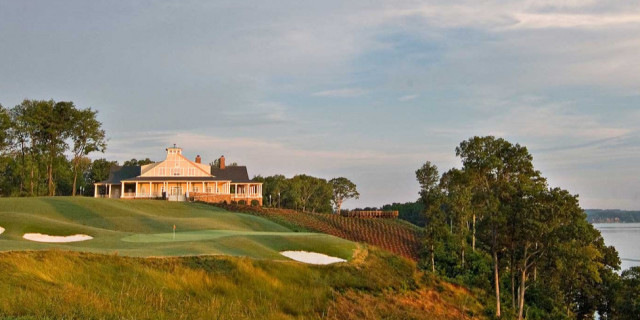 The Fighting Joe course at The Shoals is another Robert Trent Jones Golf Trail and was the first RTJ Golf Trail course to break 8,000 yards. The course lies between the Wheeler and Wilson dams on the Tennessee River and the Wheeler Dam is named in honor of General Joseph “Fighting Joe” Wheeler, which is also where the course gets its name.

The longest hole on this tough links course comes at the monster par 5 12th hole and measures a staggering 716 yards off the back tees. Some golfers argue that the spectacular 17th hole is the signature hole on the course, but it is tough not to be distracted by the Tennessee River, which the 18th green overlooks. 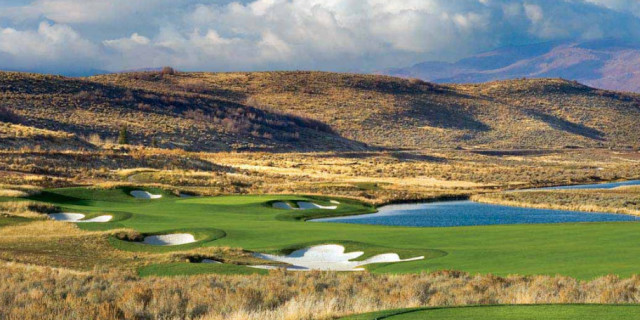 The Jack Nicklaus-designed Painted Valley Course is one of two courses at Promontory Golf Club and is regarded as the toughest golf course in Utah. Nicklaus designed the course in a links style to flow alongside a stream through Promontory’s high-altitude valleys. As you probably guess, due to its length, the course rewards the ability to hit the ball far, but also provides forward tees and broad fairways to make play fun for all standards of golfer.

The course also offers views of Park City’s three major ski mountains that can be seen almost everywhere on the course. The front nine plays up and down a valley and begins with a monster 718-yard par 5, the longest hole on the course. The back nine is laid out along meadows and features many more long holes, including the 673-yard par 4, 12th hole. The course closes with a huge 480-yard par 4. 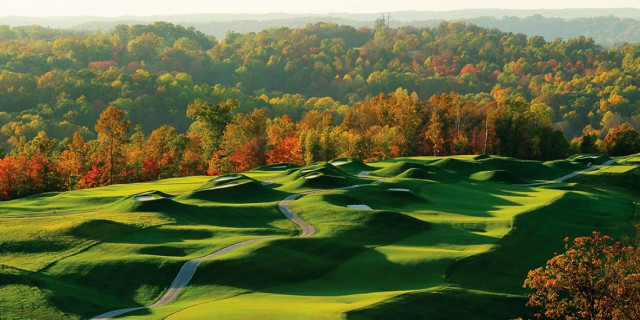 You may well recognize this course for several reasons. For starters, Pete Dye is a decorated and Hall-of-Fame architect and this course also hosted the Senior PGA Championship in 2015.  The famous description of the course is: “sketched on a napkin and carved into history” by Pete Dye. Colin Montgomerie, who finished in second behind Rocco Mediate at the championship in 2015, also called it “one of the iconic courses.”

This championship golf course is on one of Indiana’s highest elevation points and has narrow, immaculate fairways and rugged, intense terrain. The course has even gained national acclaim for its 40-mile panoramic views of the southern Indiana countryside, three man-made lakes, ‘volcano’ bunkers and variety of elevation changes. The course’s endless undulations, high grass and difficult greens makes it both one of the most difficult in the world along with the longest. 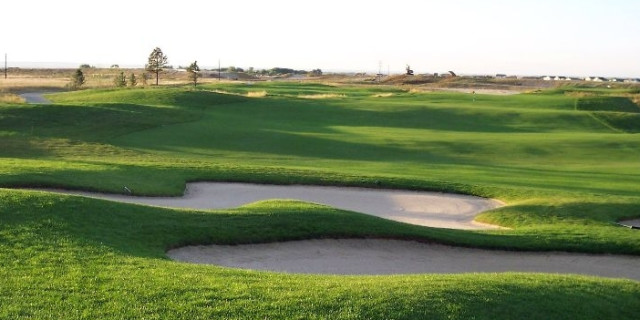 This public golf course designed by Ricky Phelps measures at a whopping 8,114 yards but don’t let that put you off playing here if you happen to be in the area; Antler Creek’s six sets of tees will provide a challenge and enjoyment for every standard of golfer.

In fact, the course is very much a player-friendly course despite its great length. It has wide fairways that artistically wind through Woodmen Hills and Meridian Ranch communities. The pleasant mix of Colorado terrain and native grasses blend well to create a dunes style course, unique to the Pikes Peak region. The course is adds to its already pleasing aesthetics as it features three lakes and 73 bunkers. 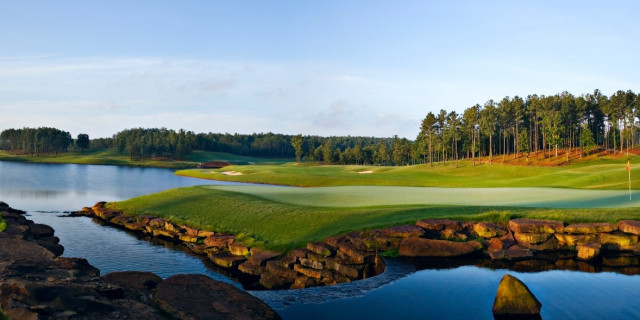 The Robert Trent Jones Golf Trail at Ross Bridge sees us reach the midway point of the top 10. The course is beautifully carved into the rolling terrain of Shannon Calley and will challenge even the best golfers. There are multiple tees for golfers of all levels so don’t think if you play this course you have to tackle all 8,191 yards of it. The beauty and challenge of each individual hole makes it difficult to pick one signature hole.

The course is symbolic of a parkland style of which ten of the holes splay along the banks of two significant lakes connected by a spectacular waterfall dropping 80ft between the 9th and 18th greens. Like many Trail courses, the par 3s are incredible and the whole course features considerable elevation change combined with water and other natural obstructions. The RTJ Golf Trail at Ross Bridge is a thoroughly enjoyable test despite its length. 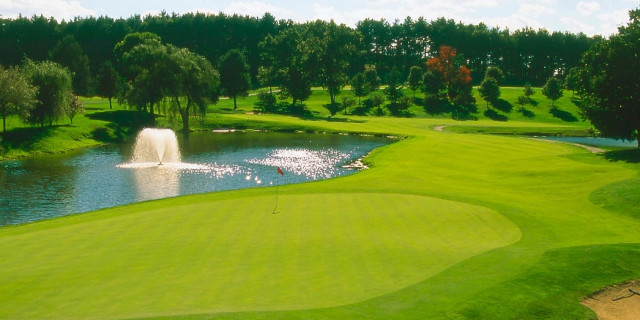 The International’s first course, the Pines Course, was renovated by Robert Trent Jones in 1972 when he introduced slick greens and challenging bunkers to make it not only one of the longest courses in the world, but one of the most difficult. The ownership of this 8,325 yard course was later sold to principal owner Daniel Weadock in 1999.

The International is very much a golfers paradise with The Oaks course, a Tom Fazio masterpiece, also available for visitors and members to play. To add to the two outstanding golf courses, The International also offers one of the largest practice facilities in New England. The International really does cater to everyone whether it’s golf, corporate off-site conferences, business entertaining or weekend getaways. 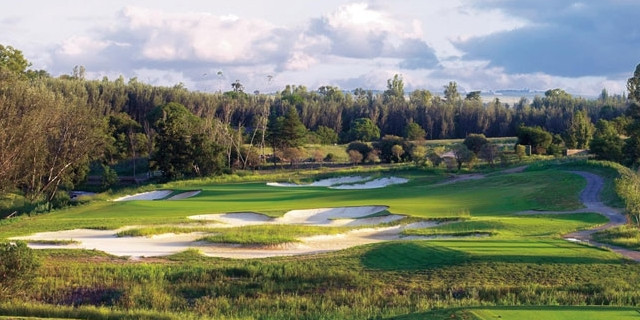 Measuring at 8,420 yards, the Blair Atholl Golf course in Johannesburg comes in at number three on our list. The course has been designed in such way that the routing has allowed for eleven water featured holes and whether you’re alongside the Crocodile River or natural dams, each hole has a unique aesthetical appearance designed to enhance the playability, shot value and variety.

The course was designed by Gary Player and offers a challenging and rewarding experience for both scratch and handicapped golfers. The course has several natural features such as the 150-year-old water canal that weaves its way through the course, as well as the Crocodile River that hosts a large community of different sedges and water plants that support the abundance of bird life. 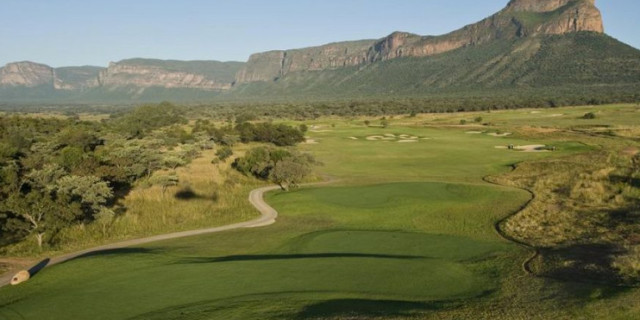 The Signature Course at the Legend Golf & Safari resort in South Africa features 18 holes designed by 18 professionals. For example, each pro was given a hole to design and the 18th hole is designed by the two-time US Open winner Retief Goosen. The course itself measures a staggering 8,500 yards but still maintains an enjoyable challenge with some incredible views.

You will probably have heard of this course as it is better known for its par 3 Extreme 19th hole. The auxiliary par 3 hole has a fairly elevated tee, that elevated in fact that it is only accessible via helicopter. You then play a tee shot from some 1,200ft and hit into a green shaped like Africa below. 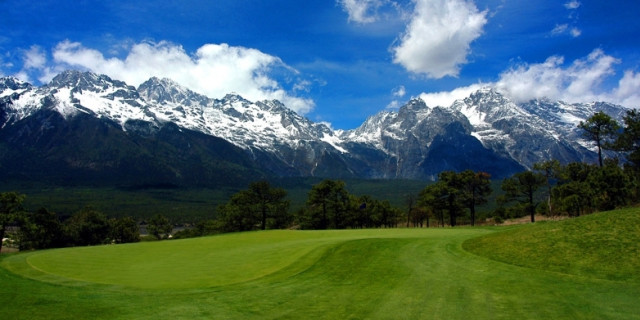 The course faces the famous Jade Dragon Snow Mountain, which is where it gets its name from and is set in the bottom of a valley. You get mountain views from every single hole, which is no surprise considering the course is situated in the Himalayas of China. The course is located 3,100 metres above sea level, making it the second highest in the world and thanks to the elevation, the ball flies some 15/20% farther than normal.

The shortest par 3 measures at 236 yards and with the remaining three par 3s measuring over 260 yards. Furthermore, the shortest par-4 on the course is 436 yards long and the par-5 5th hole is longest in the world, measuring at a staggering 711 yards. The air is so thin on this hole that oxygen is provided in the golf carts.

Robin Nelson and Neil Haworth designed the course and the two nines have completely different characteristics. The front nine is reminiscent of a Scottish links course with the back nine resembling a classic mountain course. Although the altitude allows your ball to travel further, it is still a very tough test of golf and you’ll need to middle every drive.

So if you fancy yourself as a big hitter and want to test your skills on a monstrously long golf course, make sure you give one of these a try.